Feb 27th ride from Alice's to Zelda's on the beach, and back to Los Gatos 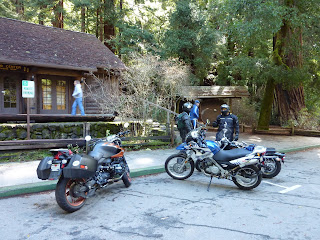 Despite a week of rain and 1" of snow on Skyline the day before, Raj Singh and Johnson Jardiniano joined me at Alice's for a ride to Zelda's and then back to Los Gatos.

Tony Guntharp had already braved 45 minutes of ice and snow on the way to meet us, so after a quick breakfast he headed back to Half Moon Bay while the rest of us headed down Skyline to Big Basin.

View Alice's to Zelda's to Los Gatos in a larger map
The weather turned out to be fantastic with blue skies and temperatures just a little on the cold side. With very few cars and bikes on Skyline, and crystal clear skies presenting 100 mile views to both the sea and east bay, the ride to 9 went quickly.

Once on 9 it was a handful of miles to Hwy 236, and then into Big Basin. Finishing the curvy 236 loop dropped us into Boulder Creek to gas up.

We then used Alba Road to cross over into Bonny Doon, then down to Hwy 1, and then south to Capitola for a lunch at Zelda's. With full stomachs we decided to simply hop over the Santa Cruz mountains via Old Santa Cruz Road which dropped us off at Lexington Reservoir. 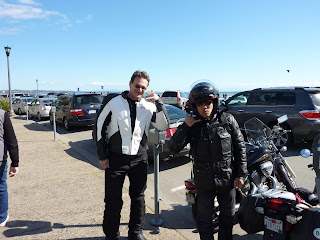 Mike and Johnson flash the "cells angels" sign in Capitola
Despite some snow on the ground and clouds threatening to crest the ridge at the beginning of the ride, the skies opened up and provided us with blue for a great day. It was a fun set of roads and I hope to run them again in warmer weather.
Posted by Unknown at 7:12 PM