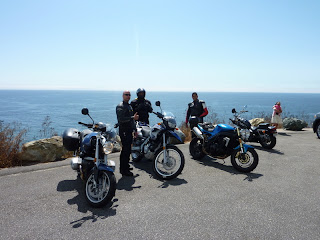 Last weekend I tagged along with some friends who were riding from SF down to San Luis Obispo to retrace a bicycle ride they had taken years earlier. I was short on time so I only joined the group for the Highway 1 trip south and then I cut inland over Nacimiento-Fergusson and made my way back up to the Bay Area.

We warmed up by taking Old Santa Cruz Highway from Los Gatos over the Soquel, and then slabbed Highway 1 down through Carmel. Although the weather forecast had called for clouds and 62 degrees, the day turned out great with a lot of sun and higher temps. 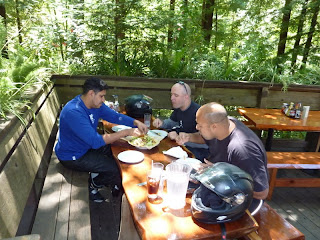 We stopped for lunch in Big Sur and our stomachs did the talking which ended up with an order for $17 nachos along with an entree for each of us. $17 nachos?! The waitress said, "Enough to serve 4". Ok, let's give it a try. Sure enough we were paying tourist prices and should have asked for the "locals" menu.

Highway 1 south from Carmel was fantastic as normal. Traffic wasn't too bad and the views were incredible. A few times I saw the other riders coming into corners too hot as I'm sure they were distracted by the scenery.

Just past Limekiln I separated from the group to take Nacimiento-Fergussen road over to Fort Hunter Ligget and the highways that would take me north again. I had never taken this road past the summit and didn't know what to expect, nor if the guards at the base entrance would let me pass through. 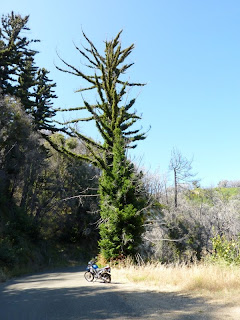 The road was 15 minutes of curviness up with great views, and another 20 min down the other side and into the base. This is the southern most area of the Los Padres National Forest that burned extensively a few years back. Here you can see my Dakar in front of a Redwood tree that is recovering from the fire. Note the new sprouts covering the entire tree making it look like a bush or shrub.
Coming onto the base I wasn't greeted by armed guards, but instead a small sign saying "don't use cell phones except for emergencies" and an empty guard station. So much for base security. 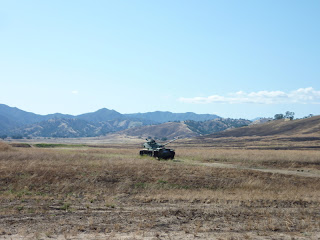 The roads on the base are great; empty valleys and smooth sweeping curves with an occasional shoot house or abandoned tank to remind you of the lands purpose. 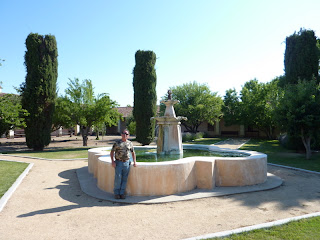 I took a detour to visit Mission San Antonio de Padua which is located on the base. The only person there was an old guy relaxing on a bench in a cause way. Upon approaching we exchanged greetings and he told me the place was closed for the day. I said I'd hoped to see the inside courtyard and he ended up giving me a full tour of the place. Cool. 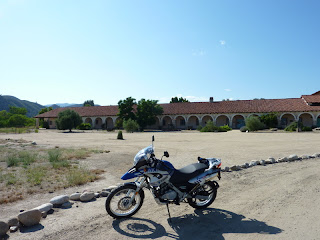 Here's my bike in front of the Mission. 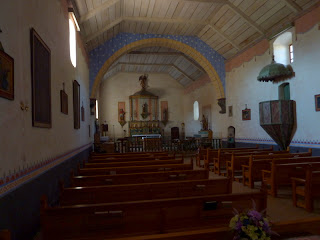 The inside of the church. This is the site of the first marriage ever in California!

Once back on the road I was running out of daylight so I headed north on 101 instead of doing my original route which included Highway 25. Several lessons were learned during my 2 hours coming up the Salinas Valley in the afternoon. First, it gets windy and I was heading straight into it. Maybe a heavy touring bike with good fairings might have made the trip better but my mini-fairing on the F650 Dakar did little to protect me. At times the cross winds were so strong I felt the bike trying to come out from under me sideways and my HJC CL-16 helmet was letting a lot of wind noise in. Not a very fun way to end what was otherwise an awesome day ride.

The other silver lining was the Dakar's gas mileage. My fill-up in Big Sur was enough to last me the next 200 miles home and I snuck into my garage with the fuel gauge on "reserve".
Posted by Unknown at 1:08 PM