Mt. Hamilton to Mines Rd, Livermore, and back through Sunol 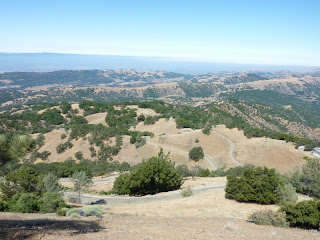 Two words: The smells. This is one of the descriptions Gary's wife, Andrea, used to depict the ride and she meant it in the best of ways. We passed through miles of golden yellow fields of grassland, forests of bay trees and oaks, and miles of curvy roads and straight-aways with virtually no traffic. And the weather was a nearly perfect: 70 degrees with blue skys. What's amazing is that all this is right next to San Jose, a city of a million or more people in a metropolitan area of another 5 million. In fact the last leg of the journey for me was surreal; Miles of open rolling hills which dropped me in the course of five minutes into the middle of suburbia.

View Larger Map and Directions
We started in Alum Rock in San Jose at Starbucks, but the venue quickly changed as we realized it's a Sunday, we weren't in a rush and there was a cafe across the street serving pancakes. After a quick and light breakfast we headed up the hill to Lick Observatory at the top of Mount Hamilton. From there we headed down to Mines Road and out to Livermore for lunch. After Livermore Gary and Andrea headed north to their home, and I went down through Sunol to Calaveras Road, and then another loop up Felter onto Sierra and down into San Jose. 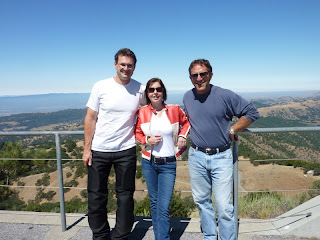 The crew: Gary, Andrea, and myself at the top of Mount Hamilton looking back down onto San Jose. 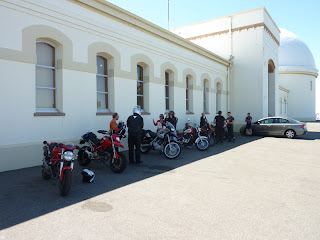 At Lick Observatory the bikes shelter in the shade from the rising temperatures. We met some really nice Ducati riders on a 1100 Hypermotard and a 900 Monster - some very beautiful bikes. They ended up following us down the hill to The Junction Bar and Grill. 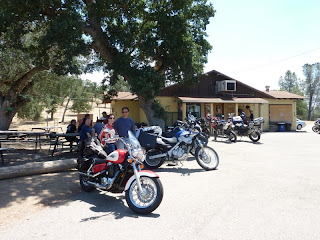 An oasis in the middle of nowhere. Seriously. The Junction Bar and Grill was packed with bikes and their riders lounging in the shade. There was also an interesting family that was camping out literally in the middle of the cafe entrance driveway watching the bikes come in. We had to veer almost off the driveway to avoid the ones seated in the middle of the road. I guess this is what you do on a Sunday in these parts. 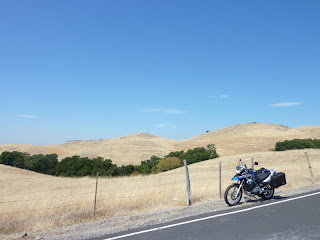 This is characteristic of the whole day. I spent five minutes walking around in the middle of the road taking pictures from various angles and there were no cars to be seen. What's amazing is that I was on a hill overlooking all of San Jose and from this spot it was only five minutes until I was back into stop lights, tract homes, and malls.
Posted by Unknown at 11:22 AM